There’s no standard form for biographies. Any way you approach them will leave out a lot of the story of lives lived. Still, of young people we’ve known, our high school mates, our friends, liked and lost track of, filling in of the long void, even in brief, brings joy and a sense we traveled somewhat together in this journey.

From his wife, Carol Kirk, we have this biography:

“I am writing to let you know that my Charlie passed away June 6, 2004. He was in remission from lung cancer for 13 years, so I feel we got an extra 13 years to enjoy of our life together and he got to do so many things he wanted to do that he hadn’t done yet.

We attended a few of your reunions and I remember meeting you. They were so much fun and I loved meeting so many of you. I know for a fact, if Charles was here he would be going to this BIG 50 reunion.

Charles spent most of these 13 years building cannons that shoot black powder. He made them from 1″ long to one that was 4 ft. tall by 5 ft. long. I must have 50 cannons he made. He had many hobbies to keep him going. He also esearched and built Henry Ford’s first car, which was a Quadricycle car with bicycle wheels and 8 horsepower motor. He liked to make me wood items, too. We also went on some trips to places he wanted to see…especially Palo Duro Canyon. That was our last trip before he started getting sick.

This was a second marriage for both of us. I feel

blessed that we were married for 25 years and that he was my soul mate.” – Carol Kirk

Carol and Charles Kirk are shown at right.

Born 30 October 1938, Charles Frederick Kirk was a member of the US Air Force and retired master plumber, a resident of Crandall, Texas. He is survived by his wife, Carol, sons Charles F., Jr. and Barry Wayne Kirk, his mother, Esther Kimmey, and a brother, J.H. Kirk. He was preceded in death by
another son, Stephen Glenn Kirk.

Charles kept his 1957 hair until the impact of chemo set in, about a week after the photo below was taken, 1991. Aside from building canons, Charles participated in western trail riding with his mules and wagon, and the mentioned involvement with automobiles. The photo at right, below, shows his restored Model A and the Ford Quadricycle he built from Ford’s blueprints. 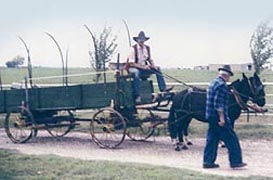