The 50th-year Reunion
of the S.F. Austin High School was held on September 7th & 8th, 2007, at the Hilton Houston Westchase, Houston, Texas

As in the past, a large group of your classmates worked tirelessly to organize this gathering for us. Most are known for their long service to the class, and a gigantic “Thank you” is owed to them. In addition, for this reunion, others joined in, some donating money, time, services, and providing food and drinks, so that the cost to classmates was kept to a minimum. The list of those to whom we are indebted is too long to mention all the names. They know their heart. What they brought is written in the smiles and the joy so evident in reunion festivities pictured below. We thank all who contributed to making this possible, and appreciate the smiles and warmth shared by all who attended.

We took some pictures for you. 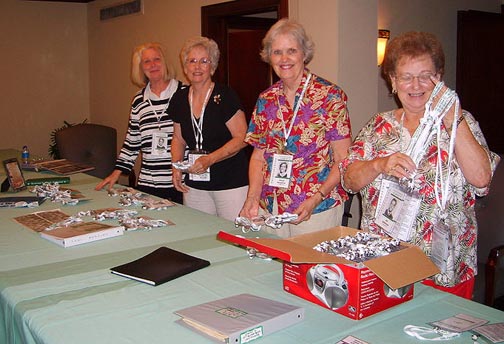 After we all got tagged, there was booze and snacks to be tended to in a Hospitality Room. Actually there were two Hospitality rooms, one of them noisy and attracting the most classmates, and another where quieter conversation took place and where there wasn’t any booze and snacks. The party went on for two days, save for a brief time out to have dinner, discussed later.

Hugh Anderson, Harold Walling and Douglas Lesser, confer on how to go about
getting Doug a name tag.

Meanwhile, Judy Walker Walling and Myrna Noe Harden muse over who might be that tall gentleman without a name tag.

Patricia Canavier Johnson and Judy Reiler Cochran were really impressed with all the flowers.

Barbara Henshaw & Tommy Cash revealed that he now must travel many miles, to a special styling salon in Deer Park, to get a really good 1950’s haircut. 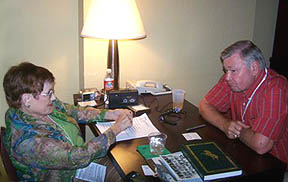 Barbara McCauley Polk worked through most of the reunion, on her special project of
interviewing and collecting biographies of all willing classmates. E-mail her.

Jimmie Sims with wife, Mary Smith Sims, Bill Hubert and Donna Heath Binion… The latter three in black, no doubt to mourn the passing of 50 years. 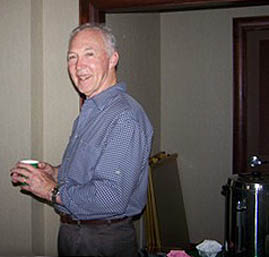 Larry Keith, left, curses quietly about finding no coffee in the Hospitality Room, while his brother, Bill, at right (Class of ’55) blocks access to the secret coffee room. 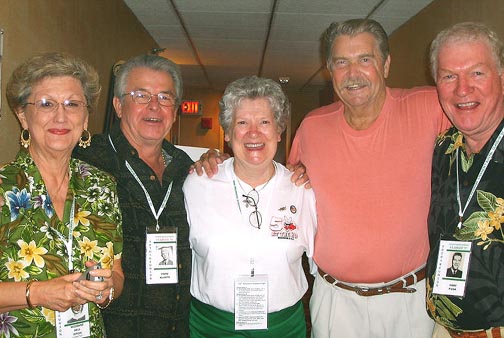 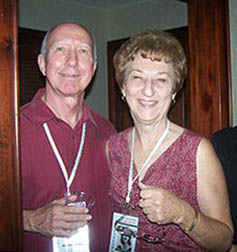 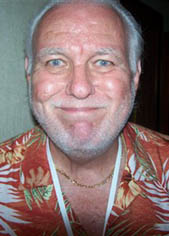 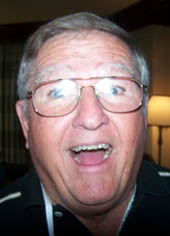 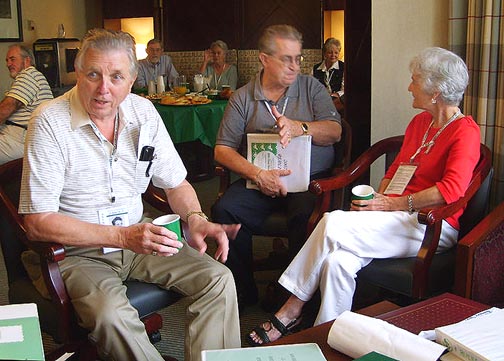 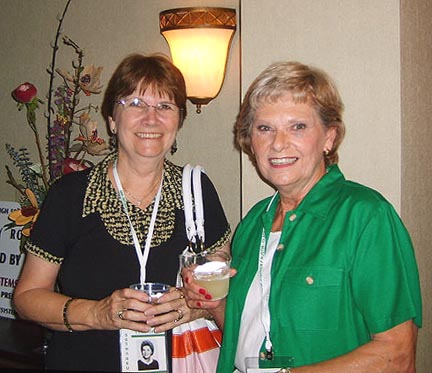 Gail Perry Grow and Anne Daigle Lantz (who gets the award for wearing the correct green). 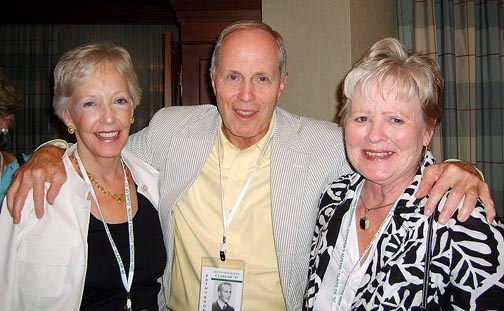 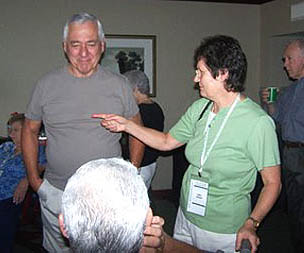 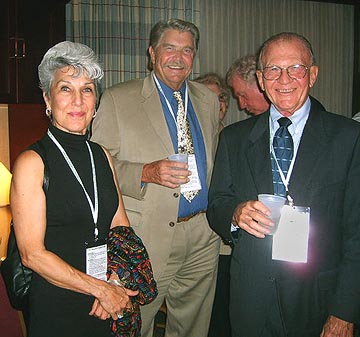 Winona Jones Dutton and Steve Kaura bask in the glow of Uriel Dutton and his name tag.

On Saturday evening, it was time to get serious in the ballroom, where snacks were replaced with a wonderful, sit-down dinner and, of course, booze. For this, people got really dressed up.

Still going strong at 77, Paul Berlin, our cultural leader from the old days, honored us with
his presence, 15 minutes of stand-up, reminisences, and wisdom about health. Gentlemen, start your prostate examinations. 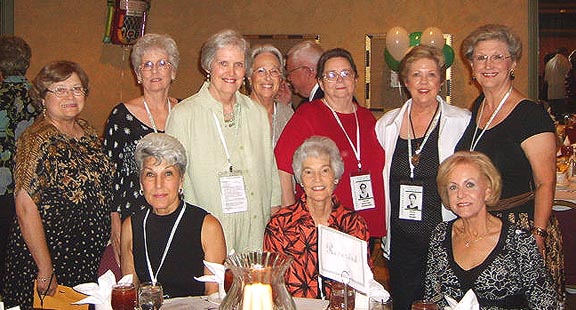 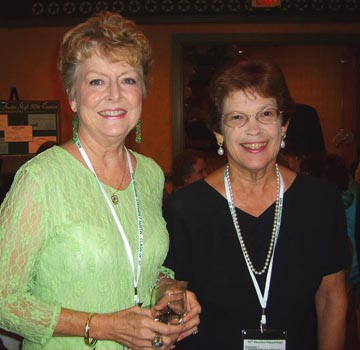 Two of the 80 candidates for “best dressed” are Jean Smith Crecelius and Virginia Massey
Bowden. Jean gets an extra point for wearing green. 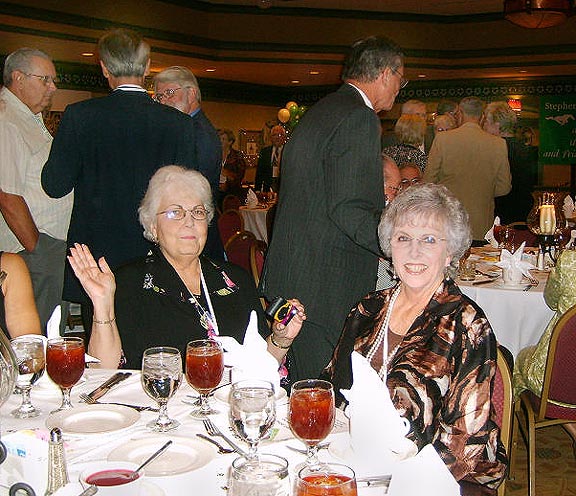 Betty Chadwick Taliaferro and Helen Hasty Statham, caught in the act of taking pictures with an old-fashioned, non-digital camera. 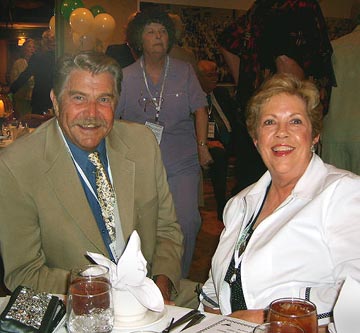 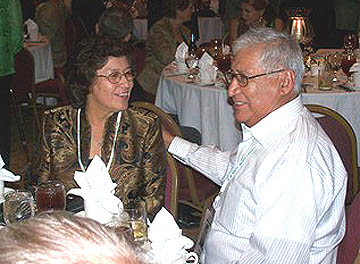 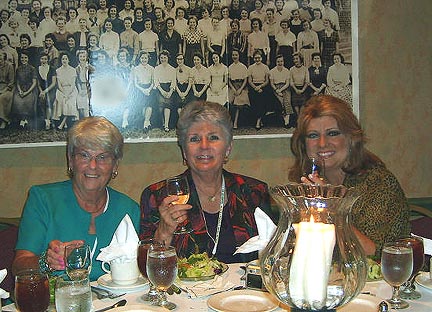 Boys from Garden Villas stick together. Here, Al Bond, Clinton Hunter and Jay Clark are
talking about how dull life was in Garden Villas.

Rosario and Joe Novotny were seated next to award-winner Jerry Gerard, who got the prize (replica of a 1957 Chevy), being the first classmate to send in his reservations for the reunion. 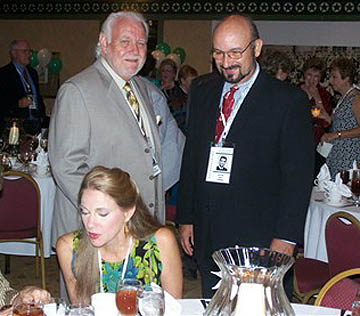 Roy observes while Alvie Jones, a noted lady’s man, keeps his eye on a beauty. 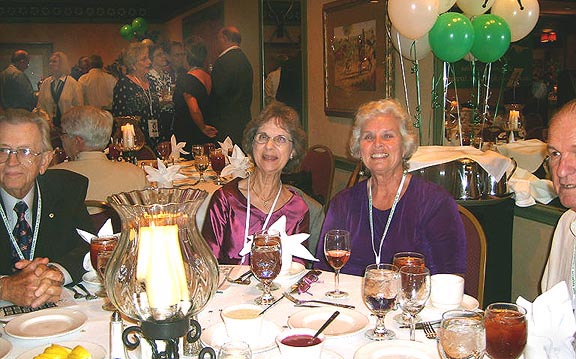 Joyce McChargue Jackson and Pat Lyons Schumacher, with husbands smart enough not to get between women with 50 years of catching up to do.

What Made Me Me

We longed for love & romance, and waited for our Prince,
And Eddie Fisher married Liz, and no one’s seen him since.
We danced to ‘Little Darlin’s and sang to ‘Stagger Lee’
And cried for Buddy Holly in the Land That Made Me Me.

Only girls wore earrings then, and 3 was one too many,
And only boys wore flat-top cuts, except for Jean McKinney.
Only in our wildest dreams did we expect to see
A boy named Georgel with lip stick, in the Land That Made Me Me.

We fell for Frankie Avalon, Annette was oh, so nice,
And when they made a movie, they never made it twice.
We didn’t have a Star Trek Five, or Psycho Two & Three,
Or Rockey-Rambo Twenty in the Land That Made Me Me.

Miss Kitty had a heart of gold, and Chester had a limp,
And Reagan was a Democrat whose co-star was a chimp.
We had a Mr Wizard, but not a Mr T,
And Oprah couldn’t talk yet in the Land That Made Me Me.

We had our share of heroes, we never thought they’d go,
At least not Bobby Darin, or Marilyn Monroe.
For youth was still eternal, and life was yet to be,
And Elvis was forever in the Land That Made Me Me.

We’d never seen the rock band that was Grateful to be Dead,
And Airplanes weren’t named Jefferson, and Zeppelins were not Led.
Beatles lived in gardens then, and Monkees lived in trees,
Madonna was a virgin in the Land That Made Me Me.

We’d never heard of microwaves, or telephones in cars,
And babies might be bottle-fed, but they weren’t grown in jars.
Pumping iron got wrinkles out, and ‘gay’ meant fancy-free,
And dorms were never coed in the Land That Made Me Me.

We hadn’t seen enough of jets to talk about the lag,
And microchips were what was left at the bottom of the bag.
Hardware was a box of nails, and bytes came from a flea,
And rocket ships were fiction in the Land That Made Me Me.

Buick’s came with portholes, and side shows came with freaks,
And bathing suits came big enough to cover both your cheeks.
Coke came just in bottles, and skirts came to the knee,
And Castro came to power in the Land That Made Me Me.

We had no Crest with Fluoride, we had no Hill Street Blues,
The girls wore superstructure bras designed by Howard Hughes.
We had no patterned pantyhose or Lipton herbal tea
Or prime-time ads for condoms in the Land That Made Me Me.

There were no golden arches, no Perrier to chill,
And fish were not called Wanda, and cats were not called Bill.
Middle-aged was 35 and old was forty-three,
And ancient was our parents in the Land That Made Me Me.

But all things have a season, or so we’ve heard them say,
And now instead of Maybelline we swear by Retin-A.
And they send us invitations to join AARP,
We’ve come a long way, baby, from the Land That Made Me Me.

So now we face a brave new world in slightly larger jeans,
And wonder why they’re using smaller print in magazines
We tell our children’s children of the way it used to be,
Long ago and far away in the Land That Made Me